The Richard Ely Trust for Young Musicians was established in 2001 in response to concerns arising within the Dorset Music Service about the number of young people who were being frustrated in their musical ambitions as a result of financial hardship. Since then, the Richard Ely Trust for Young Musicians has awarded more than 860 individual grants worth over £170,000 to help young musicians in Dorset. We also have a developing and highly successful programme of workshops for disadvantaged young people who might otherwise not have access to musical activities. We value equally all kinds of music and all stages of development. What is important to us is safeguarding opportunity where it is needed.

Much of our fundraising is achieved through our varied programme of concerts. These give our young musicians valuable performing opportunities and also demonstrate our purpose in the best possible way. We are helped in this by many other musicians, both amateur and professional, and their contribution to our work is immensely appreciated.

About our Founder Richard Ely
In his youth, Richard learned to play the piano, and subsequently the organ.  Although he never got to an advanced level with either, the experience left him with an enduring passion for music, and with immense respect for people who show talent and dedication in their music.

In his later career he became Director of Education for Dorset, and amongst the services in the Directorate was the Dorset Music Service, which did brilliant and very creative work with large numbers of young musicians of all ages and abilities.  He knew from the DMS that there were many young people whose families struggled to afford the musical opportunities they needed, so when he retired in 2000 it seemed that to set up the Trust would be a way of doing something useful and continuing to make a contribution to youth music in his new life.  The subsequent history of the Trust, and in particular the large number of families seeking support,  demonstrates that this was indeed something worth doing.

One of the great joys of the Trust for Richard is that the young musicians it supports give back so generously in the performances they give to raise funds for the work of the Trust. It brings him great pleasure to see how many young people continue to benefit from the continued support of the Trust he set up.

Richard retired as a Trustee in April 2016 after 15 years as Chairman.

Malcolm Lofts
Malcolm was keen to become a Trustee of the Richard Ely Trust for Young Musicians from its inception in 2001, having appreciated the joy that music had brought, and continues to bring, to his own family.

Malcolm moved from London to Dorset in 1982.  Following 10 years as the branch manager of a firm of accountants, he ran his own practice as a Chartered Accountant for nearly 21 years.  He continues to enjoy working in Dorchester and currently lives 8 miles to the north west.

He is also a Trustee of another Dorset musical charity.

Malcolm finds it incredibly rewarding to be a catalyst to some wonderful music-making by young people in Dorset and to see the joy it has given them and their families too. 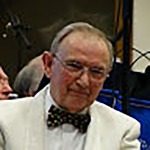 Peter has been involved in music from the age of seven, when he first learnt to play the cornet. He played in concerts around the London area and he has been involved in making music from that time on. Peter developed an interest in conducting and became a youth band leader at the age of seventeen. At the age of twenty four Peter was asked to conduct a brass band and he held the position of Musical Director for fourteen years. Continuing to study Peter passed the Bandmasters course and then moved to the Midlands and whilst there attended courses in Rehearsal and Conducting Techniques at the Birmingham Conservatoire.

Peter has enjoyed working in various voluntary positions with young people.  On retiring to Christchurch he took over as Musical Director for the U3A Christchurch Vintage Brass and remained in that position for ten years.

In 2010 Peter became involved with the Richard Ely Trust for Young Musicians and is now a Trustee responsible for Concerts, Events and PR work.

Victoria is now a Governor of Bryanston School, near Blandford, Vice President of the Weldmar Hospice in Dorchester, Board Member of the Dorset Archives Trust and Chairman of the Alcohol Education Trust (Dorset).  She is also Chairman of the Swaziland Charitable Trust, a small charity working in Southern Africa. Victoria was High Sheriff of Dorset  from 2009-2010 and has been a Deputy Lieutenant of the County since 2010.